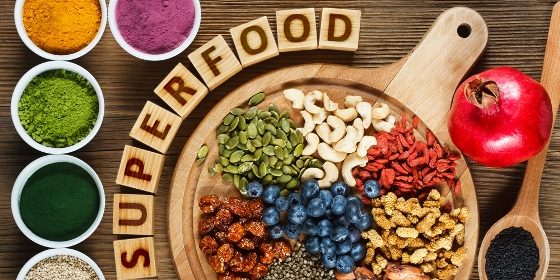 The term “superfood” has been used now for several years and is accepted by many people as factual – meaning that certain foods have super healthy benefits and without them, your body will suffer. This is far from an accurate characterization. Below is the list of the 10 top superfoods found on a pro-superfood website:

Here is a list of the 10 top superfoods from the National Health Services in the UK, which correctly criticizes the characterization of these foods as “super”:

The position taken by the superfood advocates, is that these foods are needed to somehow supercharge ones’ health, or that optimal health cannot be achieved without these foods, which are views that reflect a lack of understand of health promotion. Consider the fact that most Americans are overweight and inflamed – this means that adding a cup of blueberries per day, or adding cinnamon or garlic to meals, will NOT have a “super” effect on the system and convert an inflamed obese person into a DeFlamed obese person or somehow stimulate weight loss.

Before food modernization, remote societies were capable of eating only that which they grew, foraged, or hunted, and these societies were remarkably free of the degenerative diseases compared to their prevalence in industrialized nations. Arctic Eskimos largely ate fatty meats, such as whale, walrus, and seal. The Masai tribe in Africa lived primarily on meat, milk, and blood. Neither of these populations ate a single superfood and each population was healthy for generations.

Consider hypertension, a very common condition in America. Fasting studies have demonstrated that a 2-week water fast can normalize hypertension or reduce it to pre-hypertension levels (1,2). In this case, no foods were consumed at all, just water.

So the notion that we need a superfood to achieve a healthy state or to reverse an unhealthy state is obviously an overblown claim. The goal should be to avoid pro-inflammatory calories and replace these with anti-inflammatory calories, such as those incorrectly called superfoods, and only eat enough calories to achieve and maintain a normal body weight. The simple details of this concept and process  are outlined in The DeFlame Diet.